Day 1 of the quadrennial convention began with our first trip from the hotel to the arena.  I was given two opportunities to be on the floor that day and the experience was fantastic!

As our delegation gathered outside the main enterance of the convention for security screening, hundreds of Texans waited in line ahead of us. The many cowboy hats created a discussion among the New Mexico delegation members. Texans get sponsors for their broad-brimmed hats and shirts designed to resemble the Lone Star state’s flag.  Yes, you could say we were jealous.  Texas does do everything BIG!!

The white tent (in picture) is the security checkpoint and not one time were any of us asked for photo I.D., unlike reports that came during the Democratic National Convention of photo I.D. required to enter the convention.  Security checkpoints weren’t quite as strict as entering federal buildings.  On Day 1 we were allowed to bring in umbrellas, but Day 2 the rule had been reversed and one of the two umbrellas in my purse was “confiscated.”

Once in “the Q” arena “lowly” alternate delegates find seats in the lower gallery, guests are sent to the icy cold upper gallery, which must have had temperatures close to that of a high altitude-flying B-17 bomber during WWII.  Delegates are allowed onto the floor of the arena.

I was allowed onto the floor by one of our delegates for the openings of the convention and gavel down by Reince Priebus.  It was an awesome moment as one realizes she’s witnessing the political process in action. 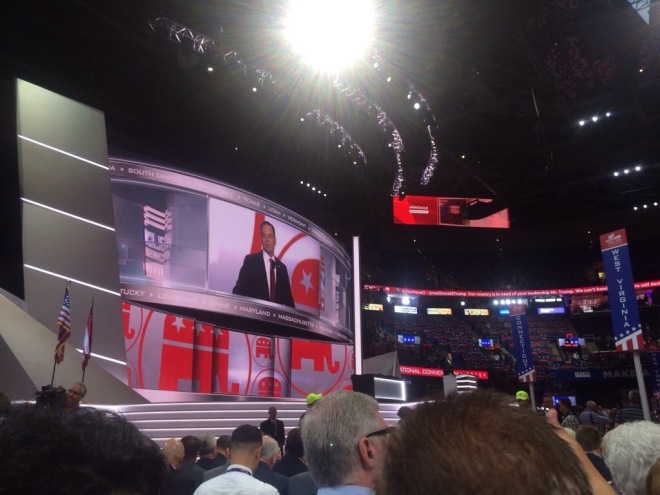 Later, during the evening session of the convention, the day’s convention theme, Making America Safe Again, was woven into nearly every speech.  Do you feel safer than you did four years ago?  Or eight?

Benghazi was a major topic in the speeches, but support of law enforcement was prevalent as well as former governor Rick Perry (ah, my hero!!), Gold Star mother Pat Smith, and biggest of all, New York Mayor Rudy Guilliani spoke (which I was again on the floor for).  I’ll give Congressman Pearce credit for editing an excellent job coordinating badge exchanges between alternates and delegates. 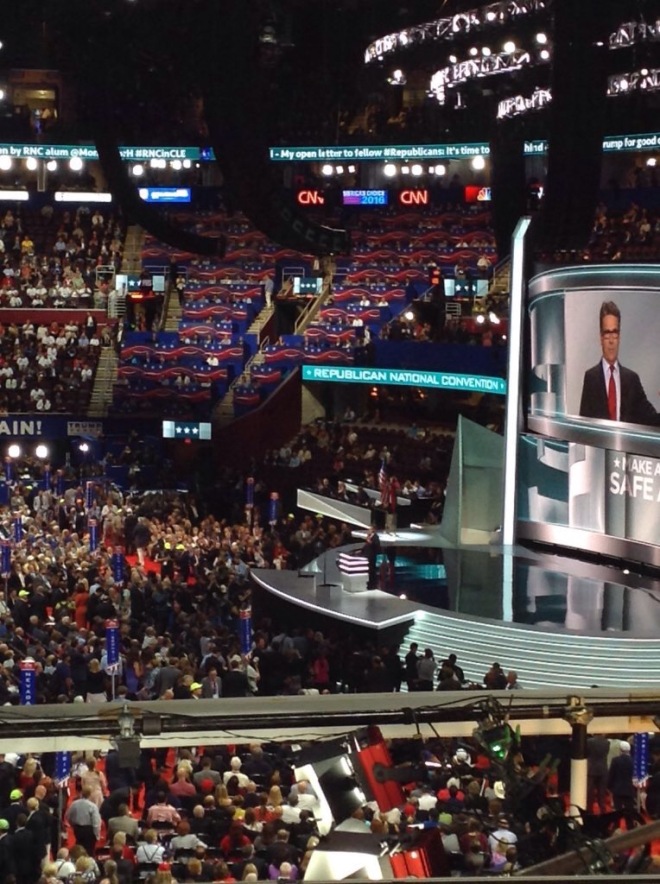 Then, in a break from tradition, Donald Trump stepped onto the stage to introduce his beautiful wife.  Melania Trump caught the audience’s attention with her story– the life of a legal immigrant who has worked hard to become a “somebody” and who had to earn her citizenship.

This is what the average American likes to see– hard working folks who were unstoppable and were ready to fight for their citizenship.  Melania is like my great-grandparents who came to America for a better future, doing it the honest, right way.  Her story is the American Dream.

As Curtis told the media, there is not a lot for First Ladies to talk about and maybe that helps explain why Melania’s speech sounded so familiar.

One thought on “RNC Quadrennial Day 1”